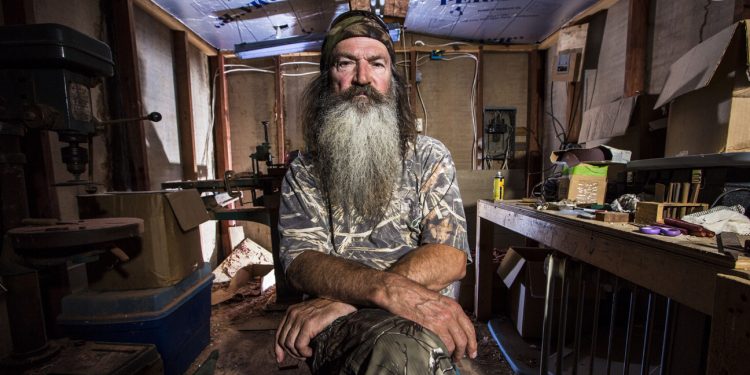 Phil Alexander Robertson is best known as a businessman because of his connection to Duck Commander and the TV show that resulted but he is also a professional hunter, former college football player, holds a master’s degree and was the subject of various different controversies.

Phil Robertson was born in Louisiana, in Vivian, being the 5th of 7 children. During childhood the family was faced with financial problems so living in tough conditions without a bathtub, toilet or electricity became reality. The entire family was mainly living off of the vegetables and fruits that the managed to grow, together with meat coming from animals hunted or fish, together with some domestic animals. Eventually, Robertson managed to thrive and went to college through a football scholarship. However, his interest was hunting, not playing sports.

In the beginning Robertson worked as a teacher, only to then move towards commercial fisherman jobs. In 1975 he was even running a local bar. His big break came because of him being an avid hunter. He was simply not happy with the duck calls on the market. Robertson decided to experiment and make calls that properly reproduce duck sounds. The first Duck commander duck call was created in 1972. The patent was then received and the incorporation of the Duck Commander company became reality in 1973. Nowadays, that company is a renowned multimillion-dollar company that is headed by Willie Robertson, Phil’s son.

The work that was done with duck calls led to totally unexpected wealth. Everything was perfectly complemented through Duck Dynasty, the successful TV show to which Phil Robertson is the patriarch. This show followed the life of the Robertson family and of Duck Commander Company, providing humor and some controversy.

Further Reading:  Very Easy Ways In Which Small Businesses Can Save Money

Robertson was renowned for having an opinion and speaking his mind when the situation allowed it. With this and the success of his business, it was expected he will get involved in politics. While he did not directly do so, he did endorse Vance McAllister in 2013. At the moment McAllister was an underdog but he did win. Specialists believe that this happened because of the support from Robertson.

In 2013 a statement Robertson made in an interview about same sex marriage and homosexuals led to his suspension from the show he was on TV but because of the support of his fans, he was reinstated really fast. As time passed other controversies hit Robertson at a personal level but since he was not involved in business anymore, his fortune was not affected.

Phil Robertson is an example of an industry professional that figured out something was missing. In this case, he identified that there was no duck call on the market that properly reproduced sounds made by the bird. As there are millions of hunters all around the world, his invention made him a millionaire. Then, he moved towards media and managed to create quite a big empire given the humble beginnings he had to deal with.