Konosuke Matsushita – How One Entrepreneur Created the Panasonic Brand 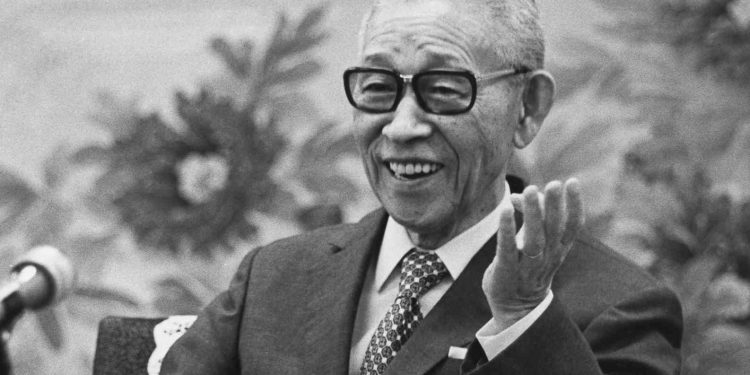 Konosuke Matsushita is a true entrepreneur success story as he started with an electric plug idea and then ended up creating the Panasonic brand everyone knows around the world. He was even involved in other important profitable business ventures, all summed up to giving him a fortune of over $3 billion.

What is interesting is that not many know much about Matsushita because he did not have as much publicity surrounding him as other top entrepreneurs of the time. This should be set straight so let’s see what the mastermind behind Panasonic did.

Just as many top successful entrepreneurs, Konosuke Matsushita had humble roots, being born in a small village in Japan. His future was not promising because the times required people to be rich, charismatic and well educated in order to be successful. With his father gambling away all the money of the family and 7 other brothers, his future did not seem bright as he was forced at 9 years old to get a job.

Eventually, Matsushita changed jobs and became an employer of Osaka Light. There he quickly got promotions and ended up having the highly respectable job of inspector. This was good for him but after creating a new light socket type, something much better than what was available on the market at the time, his goals changed. The boss was not impressed with the invention and this created even more desire to succeed. Without any business experience and with no real money available, he started manufacturing the new device alone. The only help he got was from his wife and 3 other assistants.

Further Reading:  Choosing the Right Bank for Your Small Business

As wholesalers did not want to work with him, even if they admitted that the bulb was innovative, he kept struggling until sales started to come in. By the year 1922 the firm he launched introduced brand new items on the line every single month. Business strategies were being developed and all he created was better than the competition. Matsushita early figured out that the products he launch have to be lower in price by 30% and better in quality by 30% in order to become successful. Early on in the business he just gave new products away so that he could sell many more as time passed.

Matsushita was really good at find market areas that were not properly serviced. This was the case with bicycle lamps, which were needed in the country but had a really bad reputation because of failing. He knew that developing something that was efficient would be very good for his company. That is why he worked on launching the “Bullet Lamp”. With slow acceptance but clear success, the lamp became an industry standard. After this success came an electrically heated table, a space heater and a brand new thermostat. Then we saw a radio that won a contest to boost company sales even more.

The 1930 Great Depression led to dramatic sales drops. Matsushita made the crucial decision of not laying off employees and focus on other decisions to keep the company afloat. He actually cut the work hours by 50% and still paid employees in full. His only request was that the employees help with selling the stock backlog. As the employees responded the company survived.

The Second World War destroyed the country of Japan. Matsushita’s company lost many manufacture deals as Japan lost the war and Matsushita Electric had to deal with extra restrictions. He worked hard to gain back the trust of the company managers as he thought the company can become a leader in world electronics. Slowly he rebuilt the company that kept growing, expanding and buying other firms. This all led to the breakthrough of the very first black and white TV set manufactured in 1952, an obvious huge success. The very first color TV set appeared in 1960 and that is when the name Panasonic started to become well-known.

Konosuke Matsushita managed to reach huge success in the business world mainly because of the paternal management philosophy he used. As he started with only some electric plugs, nobody really managed to predict the huge success that would have been achieved. Matsushita always said that the company needs to create wealth for the entire society and has to work to reduce poverty. The management tradition he created let to the company surviving through tough times and having the entire staff work as a family.